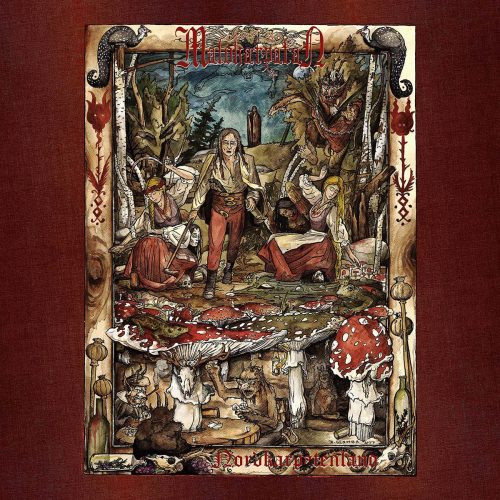 INVICTUS PRODUCTIONS, in conspiracy with THE AJNA OFFENSIVE, is proud to present MALOKARPATAN’s highly anticipated second album, Nordkarpatenland. INVICTUS shall be handling the album’s release in Europe, while AJNA will be handling North America. Fittingly, Nordkarpatenland shall be released on Halloween on both sides of the Atlantic.
Just last year, INVICTUS brought MALOKARPATAN’s debut album, Stridžie dni, to worldwide attention. Although originally released in limited editions in late 2015, the album’s bewitching charm soon entranced all who heard it; some even consider it a modern classic. With its filthy-yet-atmospheric sound half steeped in primitivism and half steeped in a strange, sincere desire to push black metal in weirder, more personal directions, MALOKARPATAN were proudly carrying on the spiritual legacy of vanguard Eastern Bloc bands like Root and Master’s Hammer – but, of course, with their own idiosyncratic touch. But as mighty ‘n’ mesmerizing as Stridžie dni may be, the now-quintet take the listener to the hinterlands of the grotesque and glorious here across Nordkarpatenland.
Truly a trip to the darkest corners of Eastern European folklore, Nordkarpatenland suitably stretches itself across more and weirder sonic landscapes. Whereas Stridžie dni steeped itself in the grit and grime of rural life, from witchcraft to drunkenness, there’s a more stately and ominous aspect to Nordkarpatenland that suggests a none-more-tweaked ambition on the part of MALOKARPATAN, as they push the extremes latent to their witching metal further and further, wilder and more wanderlusting. Not for nothing did they record the album at the very same studio the mighty Master’s Hammer recorded their infamous The Mass demo: exuding space and shade as well as iron-fisted force, Nordkarpatenland sees MALOKARPATAN matching form with content in a most masterful fashion. Simultaneously more direct and more refined than its no-less-powerful predecessor, Nordkarpatenlanddrinks even more deeply from the ancient well of Heavy Metal Wisdom, pushing forward a masterclass in timeless metal songcraft and epic storytelling alike whilst never losing the delirium-inducing iconoclasm the band made its foundation from day one. No retro, no future, “on the surface” vs. “far below that surface,” and once again pulled off without the least bit of self-consciousness or cloying insincerity: simply, MALOKARPATAN are just being, and Nordkarpatenland simply EXISTS. Except, this is a world like no other. How far and free will you roam in Nordkarpatenland?
« Back To Releases