Business as usual! The mail order is working as normal with shipments daily and will continue to do so. We're getting the metal to you!

Vinyl reissue of the debut Qrixkuor LP from 2016 on limited gold vinyl and regular black vinyl with updated layout and silver print along with an A2 poster. Available now! 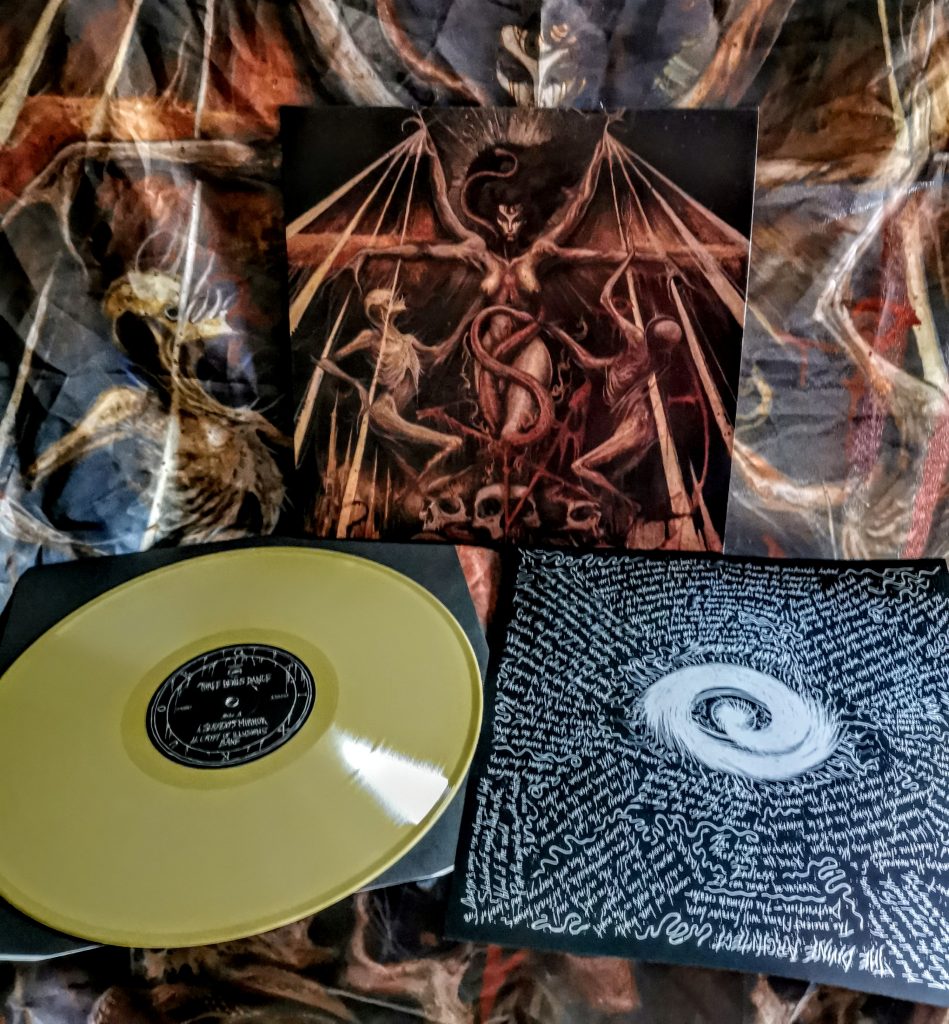 Though quietly lurking in the shadows, all is not entirely silent with Qrixkuor. A vinyl repress of the debut, Three Devils Dance, is out on Friday March 20th on regular black and limited gold vinyl. The compilation LP/CD, Incantations from the Abyss is also still available, along with the CD and the cassette edition of Three Devils Dance. For those unfamiliar with the ghastly and suffocating force that is Qrixkuor, step into the abyss;

We all know what it sounds like, but there isn’t really a firm definition for the murky sounds of the death metal’s putrid crotch. The festering emanations of bands like Portal, Abyssal, and Teitanblood are surely death metal through and through, but the added depth of those aurally suppressed soundscapes adds an element of convincing malignancy that the rest of the vast genre simply cannot match. Enter Qrixkuor, a young band hailing from the grey skies of London, who are taking this divergent trail of exigent consternation to places seldom prospected by likes of mortal men. Arriving on the scene officially in 2016 with their debut album Three Devils Dance, the band have already established a new precedent in the sub-sub-genre of cavernous death metal with 40 minutes of the most horrifically vivid conjurations of desolation you could ever imagine. Wading balls-deep into the loathsome delta between old school death metal worship and the psychotic hemispheres of modern surrealism, its an album that succeeds in not only carving an unmistakable identity for the band, but triumphantly takes established aesthetics in new directions with striking maturity and poise.

For a band as young as Qrixkuor, adept songwriting is often the achilles heel of otherwise inspired works. Such is not the case here though. Through these three sprawling epics, the quartet conjures countless moments of resplendent dismay with dynamic compositions that paralyze you as they slither through labyrinths of bewildering magnitude that burst into fervent tumult with nary a moment’s notice, only to subside back into the noxious depths with equal haste. The whole endeavour truly conveys a perpetual journey through a nightmarish landscape with a restless sense of narrative that continually evolves into new shapes and forms, and the whole thing moves in a lifelike fashion that makes the sonic hallucination all the more potent. In this regard, a lot of the credit is surely due to the wonderfully balanced production which blankets the music with a heavy layer of obfuscation, but nonetheless offers ample breathing room for the band to exhale their motifs with striking clarity. That depth of range not only allows the climaxing moments to really stick out, but adds a three-dimensional spaciousness to the immense underbelly of this beast. However, the aptitude of the compositions themselves are what truly catapult this album into realms that most of their compatriots simply fail to reach, and with sharp ears for nuanced songcraft, Qrixkuor’s detailed portraitures of hypnagogic catalcysms do well to entice you to lambaste in their world under your own volition over and over and over again.

It’s like listening to all your most beloved death metal albums of yore get melted together in the red hot spewage of an erupting volcano. Opaque and amorphous enough to writhe in new fashions upon every visitation, but structured enough to remain viciously laden with a constant barrage of focal points, Three Devils Dance is a special piece of music. Unlike many of their genre brethren who treat cavernous aesthetics as the prime driving force of their artistic vision, Qrixkuor use the gravity of lightless voids as a mere medium to convey something even more frightening. Plumes of volcanic ash spew above torch lit trails through incinerated wastelands and valleys of viscous magma as the demonic presence of malign entities unseen tail you at arms length. Things move in the shadows here, veiled by a dank haze and oppressively hot atmosphere saturated with psychotropic gases. Qrixkuor have you firmly in their clutches, insistent to reveal a world beyond our waking lives. Tortured solos and dual leads frequently and efficiently paint vivid images atop abusive drumming, only to shift gears and allow the percussion and sepulchrous vocals room to manifest emotional tension before wading back into the ominous depths. The interplay between Qrixkuor’s members is stunning in its ability to conjure evocative imagery by way of maelstrom riffing and dirges of suffocating terror, and every bit of showmanship lends itself to the greater cause of the music’s motive without so much as batting a burnt eyelash a frivolous temptations. It’s also worth noting that Three Devils Dance in its entirety is a gapless album that functions as one long song broken into three equally unsettling movements, and due to this unwavering crawl to an inevitable unknown, the band are able indenture an unparalleled level of realism.

In all actuality, Three Devils Dance might just be the finest example of murky, cavernous death metal on this side of the millennium. With a mere debut album, they’ve already taken the style to places their influences have only seen postcards of, and considering the past few years have been one of death metal’s finest eras since the early ’90s, Qrixkuor should to take great pride in their achievements as they stand firmly alongside the ranks of their shining contemporaries. Through a galvanization of old school death metal’s wailing insanity and a modern inclination towards to overwhelmingly dank opacity, the band’s magnificent debut is both a terrifyingly vivid and utterly fascinating interpretation of a genre that prides itself in theatrical horror. Take heed, this three headed monster is not to be trifled with. 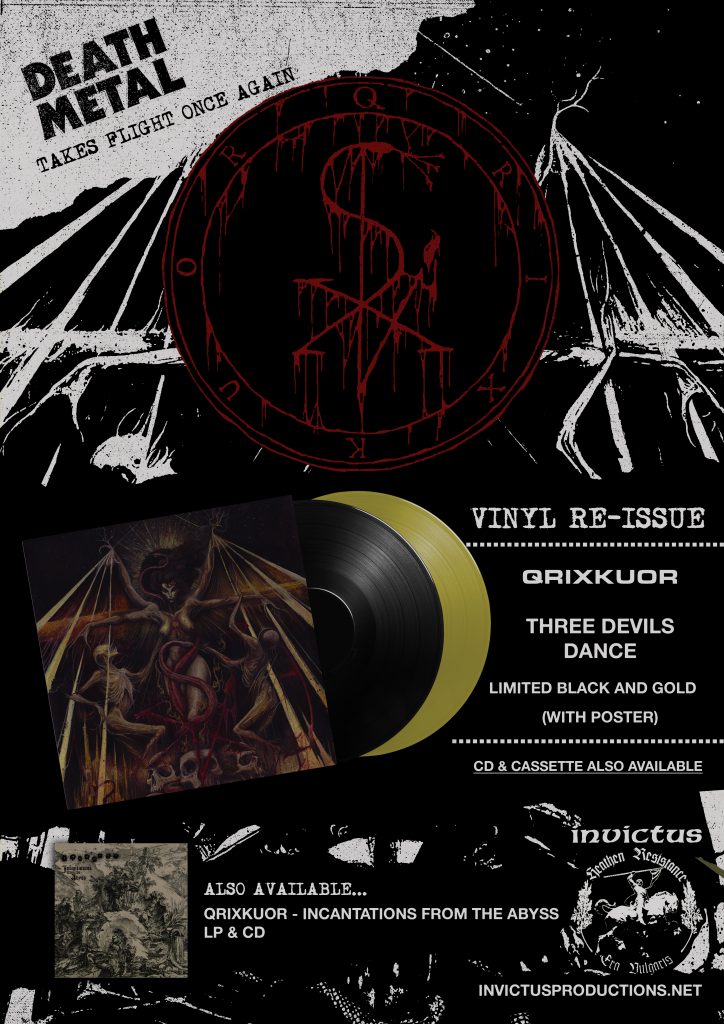